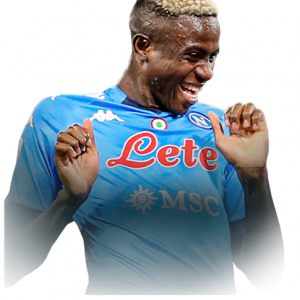 Victor James Osimhen (born 29 December 1998) is a Nigerian professional footballer who plays as a forward for Serie A club Napoli and the Nigeria national team.

Known for his composure and finishing, he is widely regarded as one of the most promising and most in-demand African footballers.

Born in Nigeria, Osimhen began his senior career in Germany at VfL Wolfsburg in 2017. Following a season and a half at the club, he moved to Belgian side Charleroi on loan in 2018–19, before moving to France at Lille. With the French side, he was nominated the club’s Player of the Season. In 2020 Osimhen transferred to Serie A club Napoli for a club-record fee of €70 million.

On 31 July 2020, Serie A club Napoli announced the signing of Osimhen, for a club-record fee of €70 million potentially rising to €80 million with add-ons, making him the most expensive African transfer to date.

On 17 October 2020, Osimhen scored his first goal for Napoli in a 4–1 win against Atalanta. Upon scoring, he held up a shirt calling for the ending of the ongoing police brutality in his home country of Nigeria.

On 13 November 2020, during an Africa Cup of Nations qualifying game played whilst on international break with Nigeria, Osimhen was stretchered off injured. This was then diagnosed as a shoulder injury that would keep Osimhen away from the playing field for two months.

While recovering from the injury, Osimhen was authorized by his club to spend time in his home country, where he got a chance to celebrate his birthday. It was during these birthday celebrations that it is believed Osimhen contracted the COVID-19 virus, as he tested positive upon returning to Naples. This positive test, together with his shoulder injury, kept Osimhen away from action until his return to the side on 29 January 2021, when he was subbed on for around twenty minutes of Napoli’s Coppa Italia win against Spezia.