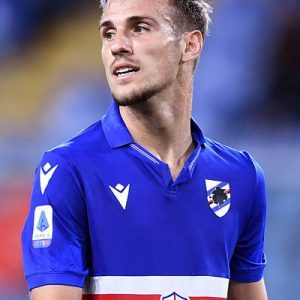 Valerio Verre (born 11 January 1994) is an Italian professional footballer who plays as a midfielder for Serie A club Sampdoria.

Roma, Genoa & Siena
As a graduate of reserve team, Verre signed a five-year contract in May 2012. On 30 July he was involved in the transfer of Mattia Destro (€16 million) from Genoa (€8.5 million) and Siena (€7.5 million), while he and Giammario Piscitella went to Genoa in a co-ownership deal for €1.5 million each. Verre was loaned to the beneficiary Siena for one season, as the club gave up on signing one of them from Roma by signing Eugenio Lamanna from Genoa for €1.5 million.
Udinese
After returning to Roma in June 2013, Verre was sold to Udinese in a co-ownership agreement for €2.5 million (along with Nicolás López for €1 million) as a part exchange to a transfer deal involving Mehdi Benatia who moved to the Giallorossi for €13.5 million.

Loans to Palermo and Perugia
After training with Udinese, he was loaned out to Serie B club Palermo on 2 September 2013, the final day of the summer transfer window.

On 13 July 2014, Udinese bought Verre outright from Roma for €900,000. On 12 July 2014, Verre left for Serie B newcomer Perugia in a temporary deal. Verre quickly became the first choice Midfielder for Perugia and an integral part of the team along with youngsters Vittorio Parigini, Edoardo Goldaniga, Nicolo Fazzi, and Ivan Provedel. He helped Perugia to a Serie B promotion-playoff and finished the year with 5 goals and 4 assists.

Return to Perugia
On 17 August 2018, Verre joined to Serie B side Perugia on loan with an option to buy.

Loan to Verona
On 10 August 2019, Verre joined Hellas Verona on loan with an option to buy.