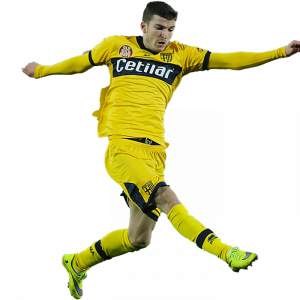 Valentin Mihai Mihăilă (born 2 February 2000) is a Romanian professional footballer who plays as a winger for Serie A club Parma and the Romania national team.

Mihăilă began his professional career in 2017 at Universitatea Craiova, appearing in over 60 Romanian first league matches before being subject to a €8.5 million transfer to Italian team Parma at age 20.

Internationally, he represented Romania at under-19 and under-21 levels before recording his full debut for the nation in March 2021.

On 5 October 2020, Italian team Parma announced the signing of Mihăilă on a five-year contract, with “the Yellow and Blues” reportedly paying a transfer fee of €8.5 million for the winger. This made him the third-most expensive sale of the Romanian league championship at the time, as he had slightly surpassed former teammate Alexandru Mitriță on that place.

After struggling for several months with athletic pubalgia, Mihăilă finally made his debut for Parma on 3 January 2021, after entering as a 75th-minute substitute in a 0–3 Serie A loss to Torino. Three days later, he came on in the 10th minute for injured Yann Karamoh in another 0–3 league loss to Atalanta. Mihăilă appeared for the first time in the starting eleven on 21 January, and managed to score the equaliser in an eventual 1–2 defeat to Lazio in the Coppa Italia’s round of 16.

He registered his first Serie A goal on 7 March, in a 3–3 away draw with Fiorentina in which he also assisted Jasmin Kurtić. The following fixture, compatriot Dennis Man provided the pass from which Mihăilă opened the scoring in a 2–0 defeat of Roma.