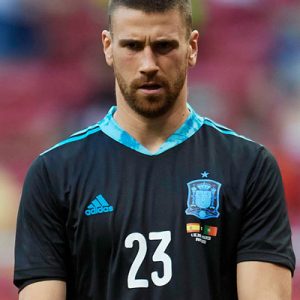 Unai Simón Mendibil (born 11 June 1997) is a Spanish professional footballer who plays as a goalkeeper for La Liga club Athletic Bilbao and the Spain national team.

Simón was born in Vitoria-Gasteiz, Álava, Basque Country, and joined Athletic Bilbao’s youth system in 2011, from CD Aurrerá de Vitoria. He made his debut as a senior with the farm team in the 2014–15 season, in Tercera División.

On 8 June 2016, Simón was promoted to the reserves, freshly relegated to Segunda División B. He immediately became a starter for the side, contributing with 29 appearances during the campaign.

On 2 June 2017, Simón was called up to the main squad for the pre-season by new first team manager José Ángel Ziganda, but continued to appear exclusively for the Bs. On 13 July 2018, he signed a contract extension until 2023, and was loaned to Segunda División side Elche CF two weeks later.

On 15 August 2018, after Kepa Arrizabalaga’s departure from the club and Iago Herrerín’s injury, Simón was recalled by Athletic. He initially appeared to be behind the older Álex Remiro in the queue for selection, but made his professional – and La Liga – debut five days later, starting in a 2–1 home win against CD Leganés. In just his third league appearance for Athletic Bilbao, Simón played in a 1–1 draw with Real Madrid where he made several key saves and was named player of the match. However, when Herrerín regained full fitness in October 2018 he was made the starting goalkeeper, with Simón’s only appearances over the subsequent four months coming in the Copa del Rey.

For the 2019–20 season, Simón was given the #1 squad number and began the campaign as first choice, keeping a clean sheet in an opening day win over FC Barcelona. He continued his strong form throughout the season, missing two fixtures with illness and completing 33 matches in the league, conceding 29 goals to finish third in the Zamora Trophy rankings. On the 37th, penultimate, matchday, he was sent off during the first half against CD Leganés for a ‘last man’ challenge outside the penalty area, with the resultant suspension ending his season a game early; with ten men, Athletic Bilbao lost 2–0 to end their slim hopes of qualifying for the UEFA Europa League.

In August 2020 he signed a new contract with the club running to the summer of 2025, with no buyout clause.