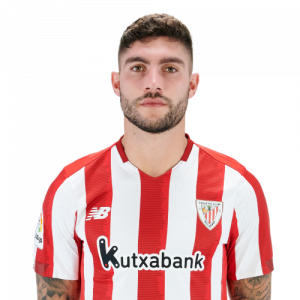 Unai Núñez Gestoso (born 30 January 1997) is a Spanish professional footballer who plays as a centre back for La Liga club Athletic Bilbao and the Spain national team.

Born in Sestao, Biscay, Basque Country and raised in neighbouring Portugalete, Núñez joined Athletic Bilbao’s Lezama academy in 2007, aged ten. He made his debut as a senior with the farm team in the 2015–16 season, in Tercera División.

On 7 June 2016, Núñez was promoted to the reserves, freshly relegated to Segunda División B. He immediately became a starter for the side, appearing in 33 matches and scoring three goals during the campaign.

On 2 June 2017, Núñez was called up to the main squad for the pre-season by new first team manager José Ángel Ziganda. He made his first team – and La Liga – debut on 20 August, starting in a 0–0 home draw against Getafe CF.

On 30 October 2017, after already becoming a regular starter, Núñez renewed his contract until 2023, with a €30 million buyout clause. The following 31 March he scored his first goal in the main category, netting the opener in a 1–1 home draw against Celta de Vigo.

After 36 appearances in 2017–18, Núñez played much less (14 matches) during the 2018–19 season, initially finding himself behind rookie Peru Nolaskoain as well as Iñigo Martínez and Yeray Álvarez in the queue for selection in the position.

In November 2020 he signed an extended contract running to 2025, with no buyout clause.