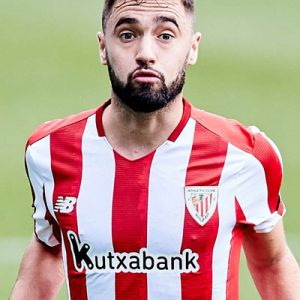 Unai López Cabrera (born 30 October 1995) is a Spanish professional footballer who plays for Athletic Bilbao as a central midfielder.

Born in Errenteria, Gipuzkoa, López joined Athletic Bilbao’s youth system in 2011 at the age of 14 from neighbouring Real Sociedad, after starting out at Antiguoko. He made his debut as a senior with the farm team in the 2012–13 season in Tercera División, and in June 2013 was promoted to the reserves in Segunda División B.

López was called up to the main squad by manager Ernesto Valverde on 2 July 2014, for pre-season matches. In August he was also added in the B list for the campaign’s UEFA Champions League, being assigned the number 29 jersey.

On 27 August 2014, López was named on the bench for the Champions League play-off match against S.S.C. Napoli. He made his first-team debut the following day, coming on as a substitute for Markel Susaeta in the 72nd minute of a 3–1 home win and also providing an assist to Ibai Gómez in the last goal. His La Liga bow took place on the 30th, when he featured 23 minutes in the 3–0 defeat of Levante UD also at the San Mamés Stadium.

On 26 July 2016, after a season back at the B side in Segunda División, López was loaned to CD Leganés for one year. On 1 August of the following year, he moved to second tier club Rayo Vallecano on a one-year loan deal.

López scored his first competitive goal for Athletic on 8 March 2020, from a free kick to open a 4–1 away league victory over Real Valladolid.