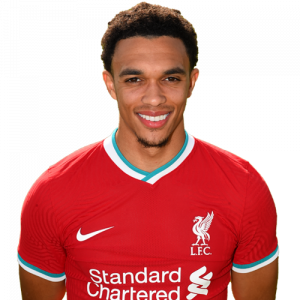 Trent John Alexander-Arnold (born 7 October 1998) is an English professional footballer who plays as a right-back for Premier League club Liverpool and the England national team.

Alexander-Arnold joined Liverpool’s academy in 2004 and captained the club at across its youth levels. He made his senior debut in 2016, at age 18, and played in back-to-back UEFA Champions League finals in 2018 and 2019, winning the latter and being named in the Champions League Squad of the Season. These appearances made Alexander-Arnold the youngest player to start in consecutive finals in the competition. In the same year, he won the UEFA Super Cup and the FIFA Club World Cup. In domestic football, Alexander-Arnold won the 2019–20 PFA Young Player of the Year and the inaugural Premier League Young Player of the Season awards, has twice been named in the PFA Team of the Year, and helped end Liverpool’s 30-year league title drought by winning the 2019–20 Premier League.

Alexander-Arnold has also represented England at various youth levels and made his senior debut in 2018. He has since featured at the 2018 FIFA World Cup, where he became only the fourth teenager to start a match for England in the tournament, and in the 2018–19 UEFA Nations League where his nation ended third.