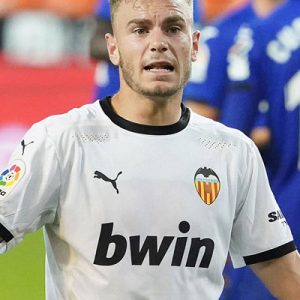 Antonio Latorre Grueso (born 21 November 1997), known as Toni Lato or simply Lato, is a Spanish professional footballer who plays for Valencia CF as a left back.

Valencia
Born in La Pobla de Vallbona, Valencia, Lato was a Valencia CF youth graduate. He made his debut as a senior with the reserves on 29 March 2014, coming on as a second-half substitute in a 0–0 home draw against Elche CF Ilicitano.

On 25 June 2015 Lato signed a new contract with the Che, agreeing to a five-year deal and being definitely promoted to the B-team. On 6 January of the following year he was first included in a first team matchday, remaining unused in a 4–0 home win against Granada CF for the season’s Copa del Rey.

Lato made his first team debut on 25 February 2016, replacing fellow youth graduate José Luis Gayà at half time in a 4–0 UEFA Europa League away routing of SK Rapid Wien. He made his La Liga debut for on 9 January 2017, coming on as a half-time substitute for Guilherme Siqueira in a 3–3 draw against CA Osasuna.

Lato scored his first competitive goal for the Che on 18 April 2019, netting the first in a 2–0 home defeat of Villarreal CF for the season’s Europa League, helping his team qualify for the semifinals as a result. On 5 July 2019, he signed a contract extension with Valencia until 2022; his release clause was set at € 80 million.