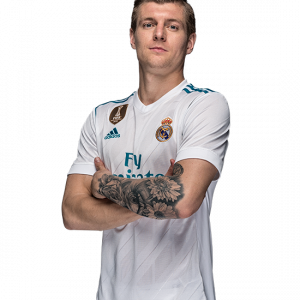 Toni Kroos (born 4 January 1990) is a German professional footballer who plays as a midfielder for Spanish club Real Madrid and the Germany national team.

Kroos plays mainly as a central midfielder, but has also been deployed as a deep-lying playmaker in his career. Known for his vision, passing, creativity, crossing and set-piece ability, Kroos is widely regarded as one of the best midfielders in the world.

Kroos began his senior club career playing for Bayern Munich, where he made his debut at age 17 in 2007. He was sparingly used, and opted for an 18-month loan spell at fellow Bundesliga side Bayer Leverkusen, where he became a key contributor, and returned to his parent club with an increased profile in 2010. With Bayern, Kroos won two consecutive league titles, a UEFA Champions League title, two DFB-Pokal titles, and was voted into the league team of the season three times. In 2014, he joined Real Madrid in a transfer worth €25 million.

In Madrid, Kroos won nine trophies, including two La Liga titles and three UEFA Champions League titles, which he won consecutively from 2016 and 2018, each time being selected in the competition’s team of the season. He has been selected in the FIFPro World11 and UEFA Team of the Year three times, and the league’s team of the season twice. He was voted the IFFHS World’s Best Playmaker in 2014 and German Footballer of the Year in 2018.

Kroos won Golden Player at the 2006 UEFA European Under-17 Championship, where he also finished as top goalscorer, and won the Golden Ball at the 2007 FIFA U-17 World Cup. He made his senior debut for Germany in 2010, at age 20, and appeared in five major tournaments. Kroos helped Germany win the 2014 FIFA World Cup, where he was top assist provider and voted to the All-Star Team, Dream Team, and German Player of the Year. At UEFA Euro 2016, he was selected to the Team of the Tournament.

Kroos opened his goal account for the campaign in the La Liga season opener against Celta de Vigo at Balaídos in a 3–1 win with a long range effort.

On 8 January 2020, Kroos scored his first Supercopa goal directly from a corner kick against Valencia in the 2019–20 Supercopa de España Semi-final in Jeddah as Los Blancos won 3–1. Three days later, Real Madrid won the Supercopa after beating the local rivals Atlético Madrid on penalties. On 16 February, Kroos again scored against Celta Vigo, this time at the Bernabeu in a 2–2 league draw. This was his sixth goal against the Galacian club, meaning he had scored against them more than any other team in his career.

On 16 June, when La Liga restarted after a three-month hiatus due to the COVID-19 pandemic, Kroos scored Real Madrid’s first official goal at the Alfredo Di Stéfano Stadium in just four minutes in an eventual 3–1 win over Eibar. One month later, Real Madrid went on a 10 game winning run and won the 2019–20 La Liga with Kroos featuring in all 11 matches post lockdown. On 8 August, Kroos’ season came to an end as City eliminated Madrid in the Champions League Round of 16 (4–2 on aggregate). Despite a disappointing end to the season, this was Kroos’ most prolific season in White netting six goals across all competitions.

On 10 April 2021, Kroos scored his first El Clásico goal which came from a free-kick in the 28th minute at the Di Stefano Stadium which proved to be the winner in a vital 2–1 league win to send Los Blancos to the top of the league. This was Kroos’ first free kick goal for Real Madrid in just his sixth attempt.