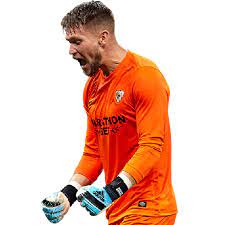 Tomáš Vaclík (born 29 March 1989) is a Czech professional association football player who plays as a goalkeeper for Sevilla.

Vaclík participated in the 2011 UEFA European Under-21 Football Championship and was named in the team of the tournament. He made his senior debut for Czech Republic in 2012 and was part of the side’s squad for UEFA Euro 2016 and UEFA Euro 2020.

Vaclík started out with FC Vítkovice in the Czech 2. Liga where he played for three seasons before transferring to Viktoria Žižkov. Žižkov won promotion to the Czech First League in Vaclík’s first season with the club. In July 2011, Vaclík signed a three-year contract with De Graafschap but it was later announced that he had failed a medical in the Netherlands and would be returning to Prague.

Basel
In May 2014 Vaclík signed for FC Basel of the Swiss Super League on a four-year contract. He made his first team league debut on 19 July 2014 in the 2–1 away win against Aarau.

On 9 July 2018, Vaclík signed with Sevilla FC in Spain’s La Liga. After three years, Vaclík confirmed on his Facebook page that he would leave Sevilla after the end of the season.