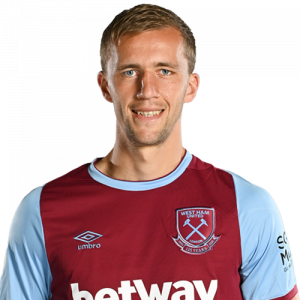 Souček has built a reputation as an energetic box-to-box midfielder with both defensive and attacking qualities. He is also known for his strong physical presence thanks to his 1.92m (6ft 4in) frame. He was likened to Marouane Fellaini by José Mourinho due to his heading ability from set-pieces.

After representing the Czech Republic in several youth categories, he made his debut for the senior side on 15 November 2016 in a friendly match against Denmark. He made his competitive debut on 10 June 2017 in Czech Republic’s 1–1 away draw against Norway in the 2018 World Cup qualifiers. He appeared in all three matches of the Czech Republic Under-21 team on the 2017 UEFA Under-21 Championship.

On 29 January 2020, Souček joined Premier League side West Ham United on an initial loan deal until the end of the 2019–20 season, with an option to make the transfer permanent in the summer. On 1 July, he scored his first goal for West Ham in a 3–2 win against Chelsea, having had a goal disallowed earlier in the same half by VAR. In West Ham’s following league match, he scored again to give his team a 2–1 lead against Newcastle United, in an eventual 2–2 away draw. West Ham announced the permanent signing of Souček on 24 July 2020 on a four-year contract, for a fee of around €21 million (£19 million). In August 2020, he was awarded the Czech Golden Ball. On 1 January 2021, Souček scored the first Premier League goal of 2021 as West Ham beat Everton 1-0 at Goodison Park.