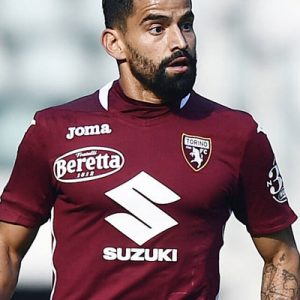 Tomás Eduardo Rincón Hernández (born 13 January 1988) is a Venezuelan professional footballer who plays as a defensive midfielder or full-back for Serie A club Torino and the Venezuela national team, which he captains.

Early career
Rincón began his career at UA Maracaibo. Then he joined Zamora in January 2007, playing 33 games and scoring one goal, up to July 2008. In July 2008, Rincón joined Deportivo Táchira and signed a contract up to 2010.

Hamburger SV
The 22-year-old midfielder played on loan at German Bundesliga side Hamburger SV. On 30 January 2009, he signed a contract until 31 December 2009. Rincón played his first match for Hamburg on 4 March 2009 against Wehen Wiesbaden in the DFB-Pokal.

He debuted in the Bundesliga on 4 April 2009 as a substitute in the 87th minute in a 1–0 win against 1899 Hoffenheim. On 10 December 2009, Hamburger SV purchased him from his former club Deportivo Táchira. Rincón signed a contract until 30 June 2014.

Genoa
On 31 July 2014 Rincón was signed by Italian club Genoa on a free transfer, and on 24 August, he played his first official match with the Gialloblu in an away game, valid for the third qualifying round of the Coppa Italia, won 1–0 against Lanciano. He made his debut in Serie A on 31 August against Napoli. With Genoa he finished in 6th place, qualifying for the Europa League, but was denied because Genoa failed to obtain a UEFA license.

The next season Rincón made his debut in the league in the second round, in a home game won 2–0 against Hellas Verona. On 22 November 2015 he scored his first goal for Genoa in the game won against Sassuolo. Overall, he made 83 appearances and scored 3 goals with Genoa.

Juventus
In the middle of the 2016–17 season, Rincón was linked with a move to defending Serie A champions Juventus during the January transfer window; he ultimately signed a three-and-a-half-year deal with the Turin-based club on 3 January 2017 for a reported fee of €8 million, becoming the first Venezuelan ever to represent the Bianconeri, and was given the number 28 shirt. He made his debut for the Turin side on 8 January, coming on as a substitute for Sami Khedira in a 3–0 home win over Bologna, in Serie A. On 14 March, he made his UEFA Champions League debut with the club, coming on as a substitute for Paulo Dybala, in a 1–0 home win over Porto, in the second leg of the round of 16.

Torino
On 11 August 2017, Rincón was loaned to Torino for the 2017–18 season for €3 million, with a €6 million conditional obligation to buy. After the player had reached the condition on appearance for Torino, the club bought him outright on 6 January 2018. The deal was officially confirmed by Juventus on 5 February.