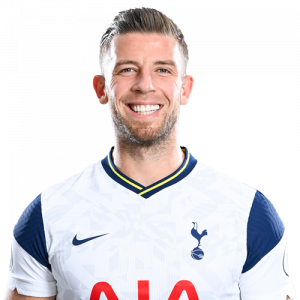 Toby Albertine Maurits Alderweireld (born 2 March 1989) is a Belgian professional footballer who plays for Premier League club Tottenham Hotspur and the Belgium national team. Mainly a centre back, he can also play as a right back.

Alderweireld began his professional career at Dutch club Ajax, where he won honours including three consecutive Eredivisie titles. In 2013, he moved to Atlético Madrid, where he won La Liga and reached the UEFA Champions League final in his first season. After a year on loan at Southampton, he moved to Tottenham Hotspur in 2015 and once again reached the Champions League final in 2019.

A full international since 2009, Alderweireld has earned over 100 caps for Belgium and represented the country at the 2014 FIFA World Cup, UEFA Euro 2016, and the 2018 FIFA World Cup.