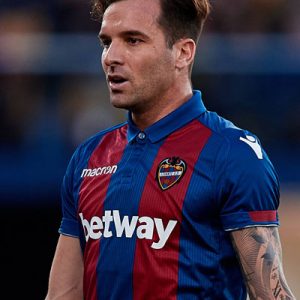 Antonio García Aranda (born 7 November 1989), known as Toño, is a Spanish professional footballer who plays for Levante UD as a left back.

Born in Alcalá de Henares, Community of Madrid, Toño made his debut as a senior with lowly Atlético Saguntino in the regional leagues. He moved to CD Castellón in summer 2009, being assigned to the reserves also in the fifth division.

Toño played his first match as a professional on 5 September 2009, featuring the last 14 minutes of a 2–0 away loss against Recreativo de Huelva for the Segunda División. He was handed his first start on the 26th, in a 3–1 home defeat to Rayo Vallecano.

Toño was definitely promoted to the first team in August 2010, with the Valencians now in Segunda División B. He appeared in 25 matches during the season, but the club dropped another level due to financial problems.

On 9 June 2011, Toño moved to Villarreal CF’s reserves for a €25,000 fee. He acted mainly as a backup to Pere Martínez, playing 18 times as they were relegated from division two.

On 15 January 2013, Toño was loaned to CE Sabadell FC until June. In February, however, he suffered a severe knee injury which sidelined him for the remainder of the campaign.

On 5 January 2014, Toño moved to Recreativo de Huelva after agreeing to an 18-month contract, with his former team also having a buy-back option. He appeared regularly for the Andalusians during his short spell, totaling 1,055 minutes of action to help to a final eighth position.

Toño signed a five-year deal with La Liga side Levante UD on 26 August 2014, for an undisclosed fee. He made his debut in the competition 13 September, starting in a 0–0 away draw against Málaga CF.

Toño scored his first goal in the Spanish top tier – and as a professional – on 30 September 2018, helping the hosts defeat Deportivo Alavés 2–1.