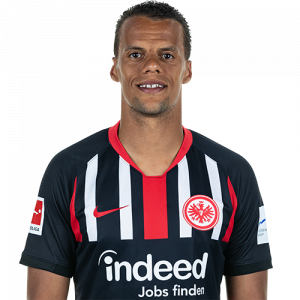 Timothy Chandler (born March 29, 1990) is a German-American soccer player who plays as a right back for Eintracht Frankfurt in the Bundesliga.

Chandler began his career at Sportfreunde Oberau as well as time with Eintracht Frankfurt before transferring to 1. FC Nürnberg in the summer of 2010. He made his debut for the first team of 1. FC Nürnberg on January 15, 2011 against Borussia Mönchengladbach. On February 12, 2011, he scored the first goal of his professional career against VfB Stuttgart.

Chandler made his first appearance of the 2011–12 season on July 30, 2011, providing an assist for Markus Feulner’s equalizing goal in an eventual 5–1 triumph over Arminia Bielefeld in the first round of the DFB-Pokal. Chandler’s debut appearance of the year’s Bundesliga campaign came a week later on August 6, playing the full ninety minutes of a narrow 1–0 defeat of Hertha BSC. Chandler netted his only goal of the campaign on November 26 against FC Kaiserslautern, blasting the ball in from the edge of the area, securing a 1–0 win and the club’s first victory in eight games. Two weeks later on December 10, the referee adjudged Chandler’s challenge on Sejad Salihović as too strong and the American was given a red card; down to ten man, Nürnberg fell to a 2–0 loss with both goals coming from Vedad Ibišević. Things turned worse for Chandler and Nürnberg two days later, as the defender was at fault for conceding the only goal of the game against SpVgg Greuther Fürth in the third round of the DFB-Pokal, eliminating his side from the competition.

In Nürnberg’s 4–1 win over Schalke on April 11, 2012, Chandler provided his second assist of the season, finding midfielder Daniel Didavi who made it 3–0. Chandler made his 30th, 29 of which were starts, and final appearance of the Bundesliga season on April 28 in Nürnberg’s 3–2 defeat of Hoffenheim, taking revenge for his red card and the club’s loss earlier in the season. Nürnberg finished the season in a respectable tenth place in the Bundesliga and Chandler attracted interest from many clubs, including VfB Stuttgart. However, Chandler decided to reject the overtures from other German clubs and signed a contract extension with Nürnberg, tying him to the club until July 2015.

Chandler’s first appearance in the 2012–13 season came in Nürnberg’s humbling 3–2 defeat to fifth division side TSV Havelse in the first round of the DFB-Pokal on August 19, 2012. His only goal of the campaign came against Hannover 96 on September 26, scoring a consolation goal as his side fell to a 4–1 defeat. Chandler again made 30 Bundesliga appearances, 29 from the start, as Nürnberg finished the league in tenth position on 44 points.

After Nürnberg were relegated at the end of the 2013–14 Bundesliga season, Chandler signed a three-year contract with his former club Eintracht Frankfurt on June 3, 2014.