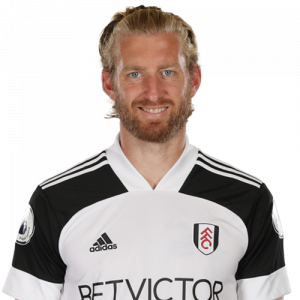 Timothy Michael Ream (born October 5, 1987) is an American professional association football player who plays as a center back for Premier League club Fulham and the United States national team.

New York Red Bulls
Ream was drafted in the second round (18th overall) of the 2010 MLS SuperDraft by New York Red Bulls. His play during pre-season impressed many observers, including new coach Hans Backe who was pleased with his distribution and tactical awareness.

Ream playing for Bolton Wanderers in 2015
Bolton completed the signing of Ream on January 26, 2012, on a three-and-a-half-year contract. He canceled his honeymoon so that he could sign for Bolton.

Ream playing for Fulham in 2016
On August 20, 2015, Ream was sold to Fulham, with whom he signed a four-year contract. The move was undisclosed fee and has an option to extend his stay by a further year.

He made his Fulham debut on August 29, 2015, in a 3–1 win over Rotherham United, playing 90 minutes. He made 29 appearances for the club in his first season, partly due to international commitment and injuries. After initially playing as a center back, he was used at left back towards the end of the season, following the departure of James Husband. He scored his first goal for the club in a 2–1 loss against Queens Park Rangers on October 1, 2016.