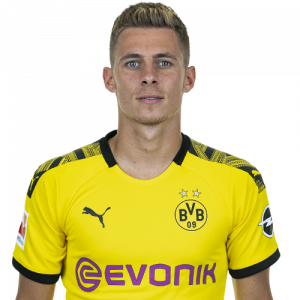 Thorgan Ganael Francis Hazard (born 29 March 1993) is a Belgian professional footballer who plays as an attacking midfielder or as a winger for German club Borussia Dortmund and the Belgium national team.

He began his professional career at Lens in Ligue 1, and moved to Chelsea in 2012 shortly after they had signed his older brother. He never played a competitive match for Chelsea, being loaned for two years to Zulte Waregem, where he was awarded the Belgian Golden Shoe in January 2014, for the best footballer in the Belgian Pro League, and the prize for best professional football player in May 2014. He joined Borussia Mönchengladbach in 2014, initially on loan, and made over 100 appearances for the club before moving to Borussia Dortmund in 2019.

Having previously played at every level in the Belgian national youth team system, he was handed his first senior international cap against the United States in May 2013. He was part of the Belgian squad that came third at the 2018 FIFA World Cup.

On 22 May 2019, Hazard joined Borussia Dortmund on a five-year contract for a reported fee of €25.5 million. He joined the club at the same time as new teammate Julian Brandt, who arrived from Bayer 04 Leverkusen.