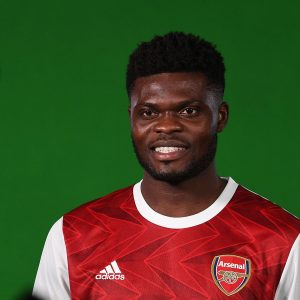 Thomas Teye Partey (born 13 June 1993) is a Ghanaian professional footballer who plays as a midfielder for Premier League club Arsenal and is the vice-captain of the Ghana national team.

Thomas began his professional career at Spanish club Atlético Madrid in 2013, going on loan to Mallorca and Almería, and returned to Atlético in 2015, with whom he won the UEFA Europa League and UEFA Super Cup in 2018. In 2020, he joined Arsenal in a transfer worth £45 million (€50 million), becoming the most expensive Ghanaian player of all time.