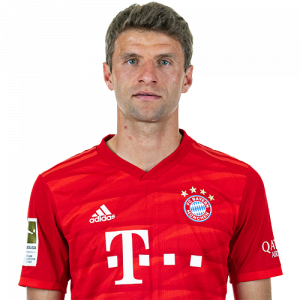 A versatile player, Müller plays as a midfielder or forward, and has been deployed in a variety of attacking roles – as an attacking midfielder, second striker, centre forward and on either wing.

A product of Bayern’s youth system, Müller has been representing the German team ever since. He made his first-team breakthrough in the 2009–10 season after Louis van Gaal was appointed as the main coach; he played almost every game as the club won the league and cup double and reached the Champions League final. Müller scored 23 goals in the 2012–13 season as Bayern won a historic treble; the league title, cup and Champions League. He broke the Bundesliga record for assists by providing 21 in a season (a record in the top five leagues jointly held with Lionel Messi in La Liga) and scored 14 goals as Bayern won a second treble in the 2019–20 season.

Müller earned a call-up to the German national team in 2010. At the 2010 World Cup, he scored five goals in six appearances as Germany finished in third place. He was named the Best Young Player of the tournament and won the Golden Boot as the tournament’s top scorer, with five goals and three assists. At the 2014 World Cup he played a major role in helping the team win the trophy, scoring five goals and receiving the Silver Ball as the tournament’s second top player and the Silver Boot as the second top goalscorer, and was also named in the World Cup All Star XI and in the Dream Team. In 2014, Müller was ranked the fifth-best footballer in the world by The Guardian. Müller is the most decorated player in German history, with his 28 trophies surpassing Bastian Schweinsteiger’s total of 26.

On 18 September 2020, Müller scored his first goal of the season, and provided one assist, in an 8–0 win over Schalke 04. He later managed to win the UEFA Super Cup and DFL-Supercup to be his 27th trophy of his club career; hence, he became the most decorated player in German history, breaking the previous record of 26 trophies won by his former Bayern teammate Bastian Schweinsteiger. On 11 February 2021, he tested positive for COVID-19 and went into quarantine; hence, could not play in the 2020 FIFA Club World Cup Final.