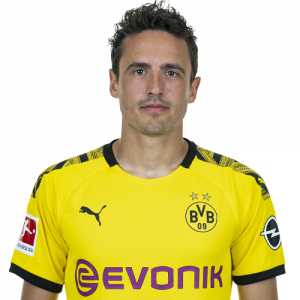 Thomas Joseph Delaney (born 3 September 1991) is a Danish professional footballer who plays as a defensive midfielder for Borussia Dortmund and the Denmark national team.

Delaney made his debut for Copenhagen in an unofficial friendly in August 2008. After playing the first half of the 2008–09 season in the KB youth team, he was a part of the FCK squad in the Danish Cup that campaign. He made his official debut in the first leg of the semi-finals against Nordvest FC in April, where he substituted Hjalte Nørregaard in the middle of second half. In the return leg two weeks later Delaney was among the starting eleven playing the first 60 minutes before he was substituted with Şaban Özdoğan.

Werder Bremen
On 17 August 2016, Werder Bremen announced Delaney would be joining the club in January 2017. On 18 February 2017, he scored his first goal for the club, a free kick, in Werder Bremen’s 2–0 win away to Mainz 05 before being stretchered off the pitch with a suspected concussion. It was the club’s first win of the new year following four straight defeats.

On 1 April 2017, Delaney scored a hat-trick, the first of his career, in Werder Bremen’s 5–2 win away against SC Freiburg.