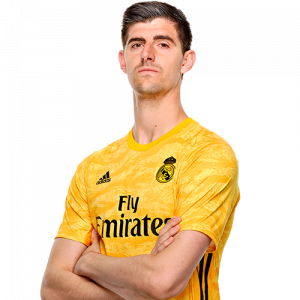 Thibaut Nicolas Marc Courtois (born 11 May 1992) is a Belgian professional footballer who plays as a goalkeeper for Spanish club Real Madrid and the Belgium national team.

He is considered by many to be one of the best goalkeepers in the world.

Courtois progressed through the youth system of Genk, and aged 18, he played a key role in the team’s Belgian Pro League victory. In July 2011 he joined Chelsea for a reported £8 million, and was immediately loaned to Atlético Madrid. In three seasons there, he won the Europa League in 2012, the Copa del Rey in 2013 and the La Liga title in 2014. He also won the Ricardo Zamora Trophy for best goalkeeper in La Liga, for his performances in his two latter seasons. Courtois returned to Chelsea in July 2014, and in his first season he helped them win the League Cup and the Premier League title. Two years later, he won the Premier League Golden Glove as Chelsea again won the league. In 2018, Real Madrid signed Courtois for £35 million, becoming La Liga’s most expensive goalkeeper, surpassing the record set by Jan Oblak. He won a second La Liga title and a third Zamora trophy in 2020.

Courtois made his senior international debut in October 2011, becoming the youngest goalkeeper to represent Belgium. He has since earned over eighty caps and appeared at the 2014 FIFA World Cup, UEFA Euro 2016, the 2018 FIFA World Cup and UEFA Euro 2020; he was awarded the Golden Glove in 2018 as the best goalkeeper of the tournament, with Belgium finishing third.

Following the 2018 season, Courtois mentioned he would want to live closer to his children, reigniting the rumours about a transfer to Real Madrid. After a strong performance at the 2018 FIFA World Cup, where he won the Golden Glove for best goalkeeper, Courtois expressed his interest in moving on. Chelsea stated they would not let him go unless they were able to find a replacement for him. Courtois responded by not showing up for training after the summer break, trying to force his exit from Chelsea. On 8 August 2018, Real Madrid announced that they had signed Courtois on a six-year contract. A day later, Chelsea confirmed the transfer.