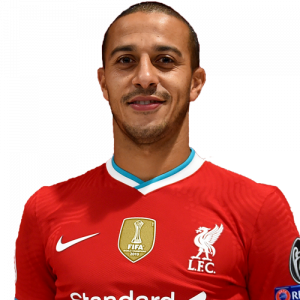 Thiago Alcântara do Nascimento (born 11 April 1991), also known simply as Thiago is a Brazilian-Spanish professional footballer who plays as a central midfielder for Premier League club Liverpool and the Spain national team.

Born in Italy as the eldest child of former player Mazinho, Thiago joined Barcelona aged 14, and made his first team debut in 2009. After winning honours including four La Liga titles, the UEFA Champions League and the FIFA Club World Cup for Barcelona, he was signed by Bayern Munich for €25 million in 2013. In Germany, Thiago won 16 trophies, including the Bundesliga seven times in a row, and the UEFA Champions League as part of a continental treble in his final year at the club. In 2020, he signed for Liverpool in a transfer worth an initial £20 million.

After helping Spain to European Championships at under-19 and under-21 levels, Thiago made his full international debut in 2011. He was part of the provisional squad for Spain in the 2014 World Cup but withdrew due to a knee injury. Thiago was selected for UEFA Euro 2016 and the 2018 FIFA World Cup.