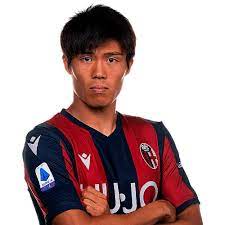 Takehiro Tomiyasu (born 5 November 1998) is a Japanese professional footballer who plays as a centre-back or right-back for Serie A club Bologna and the Japan national team.

It was reported on 29 June 2019 that Bologna agreed a 9-million euro deal to sign Tomiyasu. The transfer move was confirmed on 9 July 2019 and becomes the second Japanese player to join the club after Hidetoshi Nakata. Upon joining the club, he said: “Impression that the defensive tactics are detailed. The striker level is also very high. I chose this team because I wanted to learn individual defense tactics. First I wanted to be on the pitch.”

Tomiyasu made his Bologna debut, playing the whole game, in a 3–0 win against A.C. Pisa 1909 in the first round of the Coppa Italia. Seven days later, on 25 August 2019, he made his league debut and played the full 90 minutes of a 1–1 draw against Hellas Verona. After the match, Tomiyasu was named Man of the Match for his debut performance. Having made three appearances for the club, he was named August’s Player of the Month. Tomiyasu started in the first league seven matches before suffering a hamstring injury in mid–October that kept him out for a month. On 24 November 2019, he made his return to the starting lineup in a 2–2 draw against Parma. Since joining the club, Tomiyasu quickly established himself in the starting eleven, playing in the right–back position, and his performance has quickly impressed the Italian media and supporters alike.