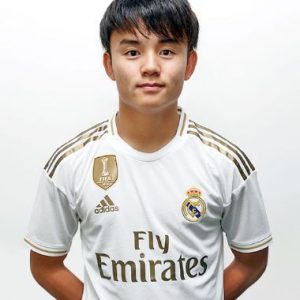 Takefusa Kubo (born 4 June 2001) is a Japanese professional footballer who plays as a winger for Spanish club Getafe, on loan from Real Madrid, and the Japan national team.

Real Madrid
On 14 June 2019, Kubo signed with Spanish club Real Madrid on a five-year deal. Although registered with their U-19 team, he had been expected to mainly play for Real Madrid B during the 2019–20 season. However, he featured regularly with the first team during Real Madrid’s preseason tour of the United States and Germany.

Mallorca (loan)
On 22 August 2019, Kubo joined RCD Mallorca on a season-long loan. He has become the third Japanese player in Mallorca’s history after Yoshito Okubo and Akihiro Ienaga. On 1 September, he made his La Liga debut playing 15 minutes in a 2–0 loss to Valencia. He became the youngest Japanese player in the Top 4 European leagues history that has played in a match with a record of 18 years, 2 months, and 28 days. He scored his first goal on 10 November 2019 against Villarreal in a 3–1 victory. He later scored his second goal in an entertaining 3–3 draw to Real Betis on 21 February 2020. He then scored his third goal two weeks later in a 2–1 victory over SD Eibar.

Getafe (loan)
Immediately after leaving Villarreal, Kubo moved to fellow top tier side Getafe CF on loan for the remainder of the season.