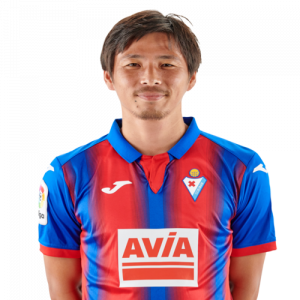 Takashi Inui (born 2 June 1988) is a Japanese footballer who plays for Spanish club SD Eibar and the Japan national football team as a winger or attacking midfielder.

Eibar
On 26 August 2015, Inui was transferred to La Liga side SD Eibar for a then club record fees of € 300,000, after agreeing to a three-year contract. He became the first Asian player to play for the club. On moving to Eibar, Inui said, “It was always my dream to play in the Spanish league one day. It’s been my dream since I was a child and now it’s come true”.

Takashi made his debut for Eibar on 23 September 2015, starting and providing one assist in a 2–2 draw against Levante. He scored his first league goal for Eibar on 10 January 2016 in a 2–1 win against RCD Espanyol, scoring the first goal in the 15th minute of game and also providing assist for second goal.

In April 2017, as the club was chasing a UEFA Europa League place, he was controversially called back to his homeland by Japan’s prime minister to serve as a delegate for the visit of King Felipe VI of Spain to Japan. On 21 May 2017, Inui became the first Japanese footballer to score against FC Barcelona, sniping the ball via cross-bar behind Ter Stegen, twice.

Real Betis
On 1 June 2018, upon expiration of his Eibar contract, Inui joined Real Betis on a free transfer for a three-year deal. He made his debut for Betis on August 17 2018, coming on as a substitute for William Carvalho for the last 25 minutes in 3–0 loss against Levante.

Alavés (loan)
The following 24 January, after being sparingly used, he moved to fellow league Deportivo Alavés on loan until the end of the season. He made his debut for Alavés on 11 January 2019 in a 2–0 win Levante. He scored his first goal for Alavés on March 2 2019 in a 2–1 victory against Villarreal.