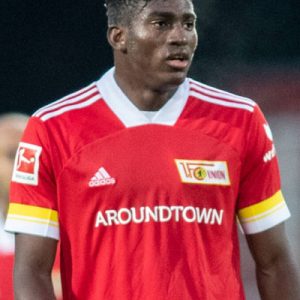 Taiwo Micheal Awoniyi (born 12 August 1997) is a Nigerian professional footballer who plays as a forward for Bundesliga side Union Berlin, on loan from English Premier League club Liverpool. Awoniyi’s style of play has been compared to that of Rashidi Yekini, Nigeria’s all-time highest goalscorer.

Early career
In 2010, Awoniyi was voted the Most Valuable Player at a Coca-Cola football competition in London. His performance at the competition was spotted by Seyi Olofinjana who invited him to join the Imperial Soccer Academy.

Liverpool
On 31 August 2015, Awoniyi signed for English club Liverpool for a fee of around £400,000 but was immediately loaned out to FSV Frankfurt.

Loan to FSV Frankfurt
Awoniyi made his debut for the club as a late substitute in a German Cup match against Hertha Berlin. After being named as a substitute for six league matches, he made his debut on 19 February 2016, playing 89 minutes against FC St. Pauli.[7] With the team of the 2. Bundesliga, Awoniyi suffered relegation and was not kept at the end of the season.

Loan to NEC
On 26 August 2016, NEC confirmed that Awoniyi had joined them on a season-long loan and was expected to join the squad the following week after the formalities of his work permit were completed. On 10 September, he made his Eredivisie debut in a 4–0 defeat of NEC to PSV Eindhoven, being replaced in the 72nd minute by Michael Heinloth. With Nijmegen, the Nigerian suffered his second consecutive relegation, being relegated from Eredivisie in 2017.

Loan to Mouscron
In July 2017 Awoniyi left Nijmegen and joined Belgian club Royal Excel Mouscron on a season-long loan, and on his debut on 12 August (also his birthday) started the match against KSC Lokeren and scored within 23 minutes.

Loan to Gent
On 17 July 2018, Awoniyi signed a new long-term deal with Liverpool and on 23 July sealed a season-long loan to another Belgian club, KAA Gent. On 11 January 2019, it was announced that his loan to Gent was cut short, and Awoniyi was loaned to Mouscron again. In April 2019 he said that his struggle to get a UK work permit could end his Liverpool career.

Loan to Mainz 05
On 6 August 2019, Liverpool confirmed Awoniyi had joined Bundesliga side Mainz 05 on a season-long loan. He was hospitalized in June 2020, after sustaining a severe concussion during a 1–0 loss to FC Augsburg in the league.

Loan to Union Berlin
On 19 September 2020, Awoniyi left for his seventh loan spell, this time joining Bundesliga side Union Berlin for a year.