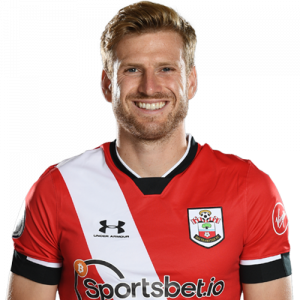 Stuart Armstrong (born 30 March 1992) is a Scottish professional footballer who plays as a midfielder for Premier League club Southampton and the Scotland national team.

Armstrong began his career with Dundee United, making his debut in 2010 and went on to make almost 150 appearances. Armstrong moved to Celtic in February 2015, and helped them win four Scottish league championships and consecutive domestic trebles. He then moved to Premier League club Southampton in June 2018.

Armstrong signed a four-year contract with Southampton in June 2018. He said he wanted to “hit the ground running” at the club. On 12 August 2018, Armstrong made his debut in a 0-0 draw against Burnley in the Premier League. In November 2018 he stated that he did not miss Scottish football. On 24 November, Armstrong scored his first goal for Southampton in a 3-2 defeat against Fulham in the league.

It was announced on 1 January 2021 that Armstrong had signed a new three-and-a-half year contract with Southampton, which will run to the summer of 2024.