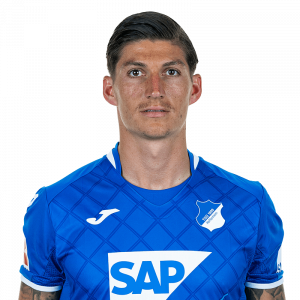 Steven Zuber (born 17 August 1991) is a Swiss professional footballer who plays as a midfielder for German club Eintracht Frankfurt and the Switzerland national team.

Zuber made his first-team debut for Grasshopper on 12 July 2008 in the Intertoto Cup second round, second leg match against KS Besa, where he came on as an 83rd-minute substitute. On 3 August, he made his first Swiss Super League appearance in a 1–1 draw with Vaduz.

On 5 July 2013, Zuber signed a five-year contract with Russian Premier League champions CSKA Moscow. He made debut on 13 July against Zenit St. Petersburg in the 2013 Russian Super Cup, which CSKA won 3–0. He made his league debut four days later against Ural.

On 14 August 2014, Zuber moved to Hoffenheim on a four-year deal. On 25 January 2017, he extended his contract until 2020. On 9 January 2019, Zuber was loaned out to VfB Stuttgart until the end of the season. On 4 August 2020, Zuber joined Bundesliga club Eintracht Frankfurt, with Mijat Gaćinović going the other way as part of a swap deal. He signed a 3-year contract.