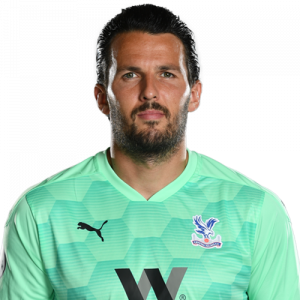 Stephen Francis Henderson (born 2 May 1988) is an Irish professional footballer who plays as a goalkeeper for Crystal Palace.

Born in Dublin, Henderson began his youth career with Belvedere before joining Aston Villa in 2005 at the age of 17. He progressed through the Villa youth system before signing his first professional contract on 5 May 2006.

Henderson was capped by the Republic of Ireland at under-16, under-17 and under-19 level. He made his under-21s debut as a substitute in a 3–2 defeat away to Sweden in October 2007. He finished his under-21 career with eight caps.

Henderson was called up to the senior national team for a February 2012 friendly match against the Czech Republic, for which he was an unused substitute.