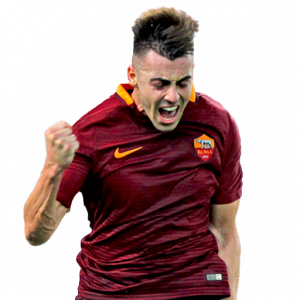 Stephan El Shaarawy is an Italian professional footballer who plays as a winger for Serie A club Roma and the Italy national team.

He is nicknamed Il Faraone (The Pharaoh), as his father is Egyptian.

El Shaarawy began his career at Genoa, and was signed by Milan in 2011 after a successful loan at Padova. Frequently regarded as one of the most promising youngsters of his generation, El Shaarawy had his breakthrough in the first half of the 2012–13 season. Following several long periods out of action due to injuries, he spent the 2015–16 season on loan with Monaco and subsequently Roma, signing permanently for the latter club at the end of the season. In 2019, he transferred to Chinese club Shanghai Greenland Shenhua, before making a return to Roma eighteen months later.

Internationally, El Shaarawy represented Italy from under-16 to under-21 levels. In August 2012, he made his debut for the senior team in a friendly against England, and in November of that year scored his first international goal against France. He represented Italy at the 2013 FIFA Confederations Cup, where they finished in third place, and at UEFA Euro 2016.

On 30 January 2021, El Shaarawy rejoined Roma on a free transfer. He scored his first goal since his return to the club 677 days after his last, getting Roma’s second in their 3–0 Europa League round of 16 win over Shakhtar Donetsk on 11 March 2021.