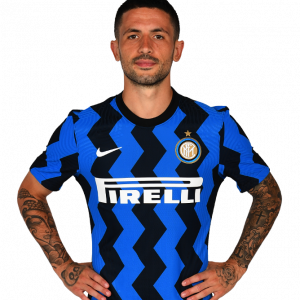 Stefano Sensi (born 5 August 1995) is an Italian footballer who plays as a midfielder for Serie A club Inter Milan and the Italy national team.

He began his career with Italian side Cesena in 2013 and was subsequently loaned out to San Marino for two seasons before returning to the club. He joined Sassuolo in January 2016 but spent the rest of the season on loan with his former club Cesena before officially joining the Sassuolo in the summer. He was loaned out to Inter in the summer of 2019 and joined them on a permanent basis in the following year.

On 2 July 2019, Inter Milan officially announced that Stefano Sensi had been signed from Sassuolo on an initial paid loan deal, with an option to buy at the end of the season. The total cost of the operation is expected to reach €25 million. Sensi made his club debut on 26 August in a 4–0 home win against Lecce, in Inter’s opening match of the 2019–20 Serie A season; he marked the occasion by scoring a goal, but later came off in the second half for Roberto Gagliardini. Sensi made his Champions League debut on 17 September in a 1–1 home draw against Slavia Prague; he contributed to Inter’s injury-time equaliser, as his free kick struck the cross-bar, and was subsequently turned in by Nicolò Barella to tie the game. Starting from January, he picked a series of injuries that effectively ruled him out of the latter half of the 2019–20 season.

On 31 August 2020, Inter exercised the buyout clause in his contract and Sensi signed a four-year deal with the club.