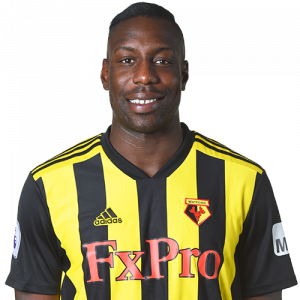 Stefano Chuka Okaka (born 9 August 1989) is an Italian footballer who plays as a forward for Seria A side Udinese.

He began his career at Roma, debuting shortly after his 16th birthday and being loaned to several other teams for the duration of his contract. He totalled over 125 Serie A games for that club, Bari, Parma, Sampdoria and Udinese. Abroad, he played 47 Premier League matches for Fulham and Watford, and had a season in Belgium with Anderlecht.

On 29 August 2016, Okaka joined Watford from Anderlecht on a five-year contract. He scored his first two goals on 10 December, against Everton in a 3–2 win. In his second season, after the departure of compatriot manager Walter Mazzarri, he was more used as a substitute; his one goal came on opening day, opening a 3–3 draw with Liverpool at Vicarage Road.

On 8 January 2019, Okaka was loaned to Udinese for the rest of the Serie A season, having played just 47 minutes for Watford all season across three substitute appearances. Both clubs were owned by Giampaolo Pozzo. He scored six goals in 16 games as the Bianconeri avoided relegation, including braces in consecutive wins over Frosinone and SPAL in May.

Okaka’s move to Udinese was made permanent on 2 September 2019, on a three-year contract.