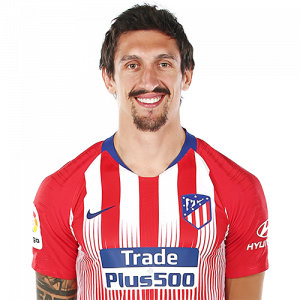 Stefan Savić (born 8 January 1991) is a Montenegrin professional footballer who plays for Spanish club Atlético Madrid and the Montenegro national team as a central defender.

Born in Mojkovac, Savić started his career at the local club Brskovo, before moving to BSK Borča, and then to Partizan. He won the double with Partizan, and then joined Manchester City for £6 million, winning the Premier League title in his only season there. In 2012, he was transferred to Fiorentina, making over 100 appearances across three seasons before signing with Atlético Madrid in 2015, where he won the UEFA Europa League and UEFA Super Cup in 2018.

A full international since 2010, Savić has made over fifty appearances and scored five goals for Montenegro.

Career in Serbia
Savić began his professional career with BSK Borča during the 2008–09 season. In early 2010, he was on a ten-day trial with Arsenal. According to Savić, he had agreed to join Arsenal in the summer, but the transfer never went through.

Manchester City
On 6 July 2011, Savić signed a four-year contract for Manchester City in a £6 million deal. He made his debut against Swansea City on 15 August as a substitute at the City of Manchester Stadium.

Fiorentina
On 31 August 2012, Italian Serie A club Fiorentina signed Savić as part of a deal for Matija Nastasić to transfer the other way. He was given the number 15 shirt and made his Fiorentina debut on 7 October, playing the full 90 minutes in a 1–0 over Bologna, and in December he scored his first two goals in a 2–2 home draw with Sampdoria.

Atlético Madrid
On 20 July 2015, Savić moved to Atlético Madrid for €10 million fee and signed a five-year contract with the club; midfielder Mario Suárez moving in the opposite direction for free as part of the deal, though Suárez later sold for €4 million in January 2016. Savić became the first Montenegrin footballer who played in the Champions League final in the 21st century, 18 years after Predrag Mijatović, who scored decisive goal in the 1998 final for Real Madrid against Juventus.