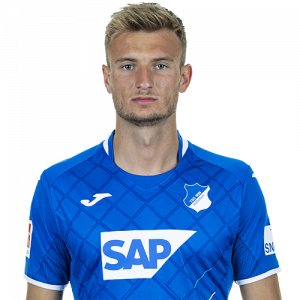 Stefan Posch (born 14 May 1997) is an Austrian footballer who plays as a defender for 1899 Hoffenheim.

Posch started his career at TuS Kraubath. In 2008 he moved to DSV Leoben. In 2009 Posch joined the Grazer AK, in 2010 he joined AKA HIB Liebenau. In the same year he switched to the youth team of SK Sturm Graz. In 2011 Posch came to the academy of FC Admira Wacker Mödling, where he played until 2014.

In April 2014 he made his debut for the Admira amateurs in the Regionalliga when he came on as a substitute for Markus Wostry on matchday 21 of the 2013/14 season against the FAC team for Vienna in the 25th minute. He scored his first goal in the regional league in September 2014 in a 1-1 draw against SC Ritzing.

In 2015 Posch moved to the TSG 1899 Hoffenheim youth training center. In the 2015/16 season he was German runner-up with his A-youth. For the 2016/17 season Posch moved up to the second team that plays in the Regionalliga Südwest. He has been part of the professional squad since February 2017. On September 28, 2017 Posch was in the starting line-up in the 2-1 loss in the Europa League against Ludogorez Razgrad and made his professional debut.  On October 14, 2017, he played in the Bundesliga for the first time in a 2-2 draw against FC Augsburg.