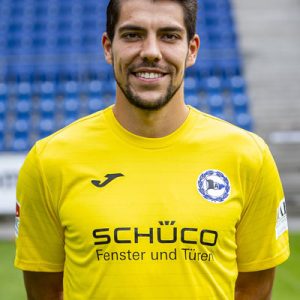 Stefan Ortega Moreno (born 6 November 1992) is a German professional footballer who plays for Arminia Bielefeld as a goalkeeper.

Stefan Ortega Moreno began his career at the north Hessian club TSV Jahn Calden before transferring to KSV Baunatal, then to KSV Hessen Kassel. In 2007, he transferred to Arminia Bielefeld and became a part of their youth setup. In the 2010/11 Season he had 6 appearances for the B-Team competing in the Regionalliga West. One year later the first team called him, and he made his senior debut for Arminia on 1 October 2011 against 1. FC Heidenheim replacing the injured Patrick Platins. After a bad performance against rivals Preußen Münster, Ortega lost his place to the Platins, instead appearing primarily in the regional Westfalenpokal. Nevertheless, Ortega was part of the Arminia squad that achieved promotion to the 2. Bundesliga at the end of the 2012–13 season, subsequently agreeing to a 2-year contract extension.

In June 2014 Ortega joined TSV 1860 Munich on a free transfer. He made his Münchner Lions debut in the 1st round of the DFB-Pokal 2014/15, winning 2–1 over Holstein Kiel. After Gábor Király departed for Fulham F.C. in August 2014, Ortega established himself as first-choice goalkeeper.

TSV 1860 Munich were relegated at the end of the 2016–17 season, Ortega left the club, transferring back to Arminia on a 3-year contract, succeeding the outgoing Wolfgang Hesl. In January 2020, Ortega extended his contract until June 2022 following transfer interest from Bundesliga club Bayer 04 Leverkusen.