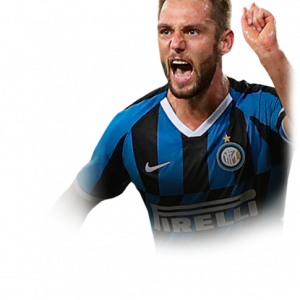 Stefan de Vrij (born 5 February 1992) is a Dutch professional footballer who plays as a centre back for Serie A club Inter Milan and the Netherlands national team.

He began his career at his local club VV Spirit, and debuted as a professional for Feyenoord aged 17. He spent five seasons at the Eredivisie club, serving briefly as captain, before joining Lazio in July 2014.

A full international since 2012, De Vrij has earned over 40 caps for the Netherlands. He was in the Dutch team which finished third at the 2014 FIFA World Cup, and was selected for the Castrol Performance Index Team of the Tournament.

Following months of speculation, on 28 May 2018, De Vrij announced that he was going to join Inter Milan starting on 1 July. On 11 July, he was officially presented as an Inter player, signing a contract until June 2023. De Vrij received squad number 6, and made his competitive debut on 19 August in the opening championship week against Sassuolo.

He scored his first goal for Nerazzurri one week later, putting his side two goals up against Torino at home, in an eventual 2–2 draw. In September 2018, De Vrij played his 100th match in Serie A in the 2–1 home win over Fiorentina. He also made his first UEFA Champions League appearance in season opener against Tottenham Hotspur, assisting Matías Vecino’s injury-time winner for a 2–1 home win. De Vrij eventually played 5 out of 6 matches in the competition’s group stage, which saw en early elimination of Inter, instead continuing their European adventure in knockout phase of UEFA Europa League.

Later on 14 March 2019, in the second leg of Europa League round of 16, De Vrij’s wrong ball control resulted fatal for Inter who conceded inside 5 minutes, and eventually lost the game to Eintracht Frankfurt 1–0 at San Siro, crashing out of competition 1–0 on aggregate. Three days later, De Vrij scored in the Derby della Madonnina match against rivals Milan, helping his team to win 3–2, taking back the third place in championship, and completing the first league double over them since 2011–12 season.