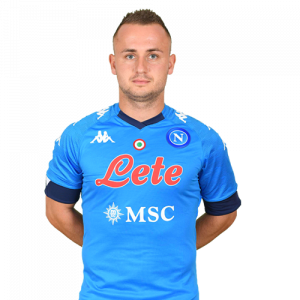 Stanislav Lobotka (born 25 November 1994) is a Slovak professional footballer who plays as a midfielder for Italian club Napoli and the Slovak national team.

Lobotka was benched in his first possible fixture against Fiorentina, on 18 January 2020, in a 0–2 defeat. Instead, Lobotka made a brief, 22 minute appearance in Coppa Italia against Lazio, being featured in the starting line-up. He had to be replaced early due to tactical changes, following a red card to Elseid Hysaj. Still, Lobotka witnessed an early winning goal by Lorenzo Insigne in the 2nd minute.

He made his league debut against table-leaders Juventus on 26 January 2020. Lobotka came on as a replacement for Diego Demme, who was booked with a yellow card in the first half. Napoli managed to earn an upset victory over the favourites, by winning 2–1, with goals scored by Piotr Zieliński and Lorenzo Insigne. Cristiano Ronaldo’s stoppage time goal did not change the result. He had his first league start in the next round, in a 4–2 away victory at Stadio Luigi Ferraris against Sampdoria. Lobotka played for over an hour and was replaced by Diego Demme, as Napoli led 2–1, after goals by Arkadiusz Milik and Elif Elmas. Demme went on to score the third goal and Dries Mertens sealed the win in stoppage time.

Lobotka had also been added to Napoli’s UEFA Champions League squad, thus making him eligible to participate in the Round of 16 fixtures against Barcelona. The first competitive set of fixtures between the clubs was also dubbed, by some, the Maradona derby.