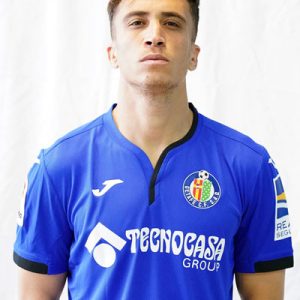 Soufiane “Sofian” Chakla (born 2 September 1993) is a Moroccan professional footballer who plays as a centre back for Spanish club Getafe, on loan from Villarreal.

Born in Kenitra, Chakla moved to Spain at the age of eight, and joined Málaga CF’s youth setup in 2010. He made his debut as a senior with the reserves in 2012, in Tercera División.

On 27 January 2014, Chakla rescinded with the Andalusians and moved to another reserve team, Real Betis B also in the fourth tier. On 11 July he signed for Hungarian club Videoton FC.

Chakla made his professional debut on 2 November 2014, starting in a 1–0 home win against Budapest Honvéd FC. However, he only appeared in six matches during the whole campaign, and was subsequently released.

On 31 May 2017, Chakla signed for UD Almería B in the fourth tier, mainly as a replacement to injured Igor Engonga. On 16 July of the following year, after helping the Andalusians in their promotion, he moved to third division side UD Melilla on a 2+1 contract.

On 17 July 2019, Chakla signed for Villarreal CF; initially assigned to the reserves in division three, he was definitely promoted to the main squad on 27 January 2020. He made his La Liga debut on 19 June, starting in a 1–0 away win against Granada CF.