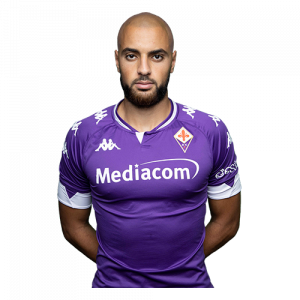 Sofyan Amrabat (born 21 August 1996) is a Moroccan professional footballer who plays as a midfielder for Serie A Italian club Fiorentina, and the Morocco national team.

Born in the Netherlands, Amrabat holds Moroccan citizenship. He represented the Netherlands internationally at youth level in 2010, before switching allegiance to Morocco’s youth national team in 2013, representing them at senior level from 2017.

Starting his senior career at Utrecht in 2014, Amrabat moved to Feyenoord in 2017. After one season, he joined Club Brugge, before being sent on loan to Italy at Hellas Verona in 2019.

On 31 January 2020, Hellas Verona exercised their option to purchase his rights from Club Brugge and immediately re-sold them to Fiorentina. In return, Fiorentina loaned him back to Verona until the end of the 2019–20 season.