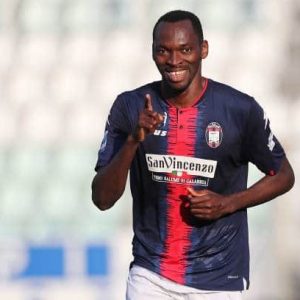 Simeon Tochukwu Nwankwo (born 7 May 1992), known simply as Simy, is a Nigerian professional footballer who plays as a forward for Serie A club Crotone.

He scored seven goals during the 2017–18 campaign, tied with Ante Budimir for second-most for the club and only one behind top scorer Marcello Trotta. This included a memorable overhead kick in a 1–1 draw against champions Juventus on 19 April 2018. Crotone, however, would be relegated at season’s end.

Although the club struggled to a twelfth place finish in their return to Serie B, Simy was able to find his form and have his best season since moving to Italy, finishing first on his team and sixth overall in goals with fourteen. He bested this in the 2019–20 campaign, topping Serie B with twenty goals and helping his team earn promotion back to Italy’s top flight.