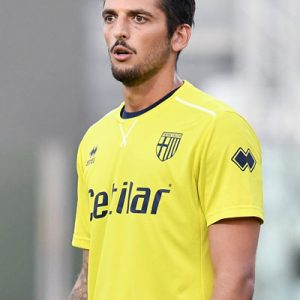 Simone Colombi (born 1 July 1991) is an Italian professional footballer who plays as a goalkeeper for Serie A club Parma.

Atalanta
Born in Seriate, the Province of Bergamo, Colombi started his career with hometown club Atalanta Bergamo. He was awarded number 91 shirt in 2008–09 season, as third keeper behind Ferdinando Coppola and Andrea Consigli.

In June 2009, he left for Lega Pro Prima Divisione club Pergocrema. He was the first choice keeper of Pergocrema until the arrival of Enrico Rossi in February. He regained his place in starting 11 in the return leg of relegation tie-breaker, which the team 1–1 draw with Pro Patria and 3–3 tie in aggregate and won the play-out by more away goal.

In August 2010, he left for fellow Lega Pro club Alessandria via Atalanta, which he was the understudy of Andrea Servili. He also signed a new 3-year contract with Atalanta on 3 August.

In January 2011 he was transferred on loan to Lega Pro Prima Divione club Juve Stabia. He played as a regular since his arrival, helping the team to gain the promotion in Serie B after the play-offs campaign. As a result, the loan is confirmed for the 2011–12 season. On 31 August 2011, he made his debut in Serie B with Juve Stabia in the home match lost 2–1 against Verona. Afterward, he had spells on loan at several Serie B teams including Modena, Padova and Carpi.

Cagliari
On 2 July 2014, Serie A side Cagliari acquired Colombi outright from Atalanta, for €1.4 million fee. In the summer of 2015 goes on loan to Palermo.

Carpi
On 2 July 2016, Serie B side Carpi have reached an agreement with Cagliari for the loan of Colombi for one season. On 10 June 2017 Carpi signed him outright.

Parma
On 11 July 2019, Seria A side Parma signed Colombi to a three-year contract.