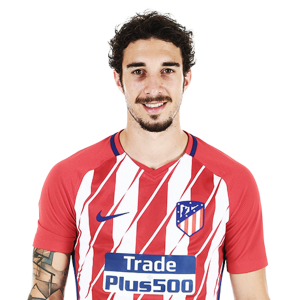 Šime Vrsaljko (born 10 January 1992) is a Croatian professional footballer who plays as a full back for Spanish club Atlético Madrid and the Croatian national team.

Atlético Madrid
Vrsaljko signed for La Liga club Atlético Madrid in 2016 on a five-year deal. On 16 May 2018 Vrsaljko started the Europa League final as Atlético won the title.

Loan to Inter Milan
On 31 July 2018, Vrsaljko joined Italian side Inter Milan on an initial one-year loan with the option to buy. On 27 January 2019 Vrsaljko was ruled out for at least six months, due to left knee ligaments surgery.

Return from loan
On 26 January 2020, he started his first game after being a year out against Leganés that ended up as a goalless draw. He was subbed off for Ivan Šaponjić in 88th minute. On 18 February, he started the home leg of the Champions League round-of-16 fixture against ruling champions Liverpool that ended up as a 1–0 victory. On 10 August, Atlético announced that Vrsaljko and teammate Ángel Correa were both positive for COVID-19, ruling them out of the team’s quarter-final fixture against RB Leipzig.

After undergoing another knee surgery during summer, Vrsaljko finally returned to the pitch on 16 December, when he scored in a Copa del Rey 3–0 victory over Cardassar.