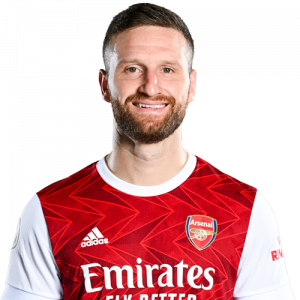 Shkodran Mustafi (born 17 April 1992) is a German professional footballer who plays as a centre-back for English Premier League club Arsenal and the Germany national team.

Mustafi began his career in the youth ranks of Hamburger SV and English club Everton, where he made one substitute appearance in ​2 1⁄2 years before leaving to Sampdoria in January 2012. He signed a five-year deal at Valencia in August 2014, and moved to Arsenal for a reported £35 million two years later.

Mustafi made his full international debut against Poland on 13 May 2014, and was part of the German teams that won the 2014 FIFA World Cup and the 2017 FIFA Confederations Cup, also competing at UEFA Euro 2016.