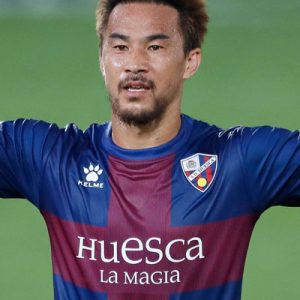 Shinji Okazaki (born 16 April 1986) is a Japanese professional footballer who plays as a forward or attacking midfielder for La Liga club Huesca and the Japan national team.

Internationally, he is currently the top active Japan national team goalscorer and third all-time in team history with 50 goals. He also won the Premier League with Leicester City in 2016.

Shimizu S-Pulse
After graduating Takigawa Daini High School in 2004, Okazaki signed full professional terms with Shimizu S-Pulse the following year. In December 2005, he made his first J.League appearance as a substitute against Sanfrecce Hiroshima.

VfB Stuttgart
On 30 January 2011, Okazaki signed a three-and-a-half-year contract with Stuttgart. On 17 February 2011, clearance to play for the club was granted for Okazaki by FIFA.

Leicester City
On 26 June 2015, Okazaki moved to Premier League side Leicester City for a fee believed to be in the region of £7 million, subject to obtaining a work permit. He made his debut for the club on 8 August 2015 in Leicester City’s 4–2 opening day win against Sunderland, and scored his first goal for the club the following week in a 2–1 win against West Ham United.

Huesca
On 4 September 2019, the free agent Okazaki signed a one-year contract with Segunda División side Huesca. On 8 September 2019, he made his debut for Huesca as a substitute.