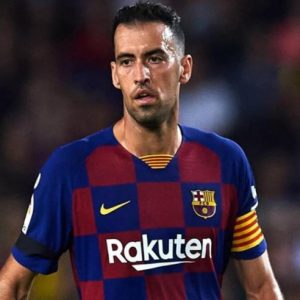 Sergio Busquets Burgos (born 16 July 1988) is a Spanish professional footballer who plays as a defensive midfielder for Barcelona and the Spain national team.

He is considered to be a deep lying playmaker capable of directing the game play through short and calm passes and one of the best defensive midfielders of all time.

Busquets made his senior international debut for Spain in April 2009, and has since made over 120 appearances for the national side. He helped the country win the 2010 World Cup and Euro 2012 tournaments, and also featured at two other World Cups and as many European Championships.

Busquets started on 6 June in the 2015 Champions League final, as the team won their fifth accolade in the competition by beating Juventus 3–1 at Berlin’s Olympiastadion. This made Barcelona the first club in history to win the treble of domestic league, domestic cup and European Cup twice, and Dani Alves, Busquets, Andrés Iniesta, Lionel Messi, Pedro, Gerard Piqué and Xavi the only players to achieve the same feat.

On 3 October 2015, Busquets captained Barcelona for the first time in the absence of regular captain Iniesta and vice-captain Messi in a 1–2 away defeat to Sevilla.

Busquets opened the scoring in a 3–0 win against Las Palmas on 1 October 2017, with the match being played behind closed doors at the Camp Nou due to the ongoing Catalan independence referendum. Around a year later, he signed a new contract until June 2023, which increased his buyout clause from €200 million to €500 million. On 24 November 2018 he played his 500th game for Barcelona away to Atlético Madrid, and he made his 100th Champions League appearance on 11 December, in a 1–1 group stage home draw against Tottenham Hotspur.

On 9 January 2021, Busquets made his 600th appearance for Barcelona in a 4–0 win against Granada at the Los Cármenes. Only his contemporaries Xavi, Iniesta and Messi had played more games in the history of the club.