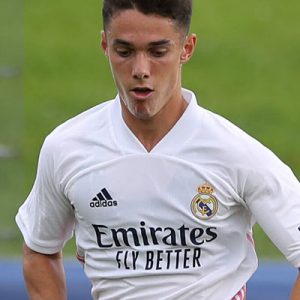 Sergio Arribas Calvo (born 30 September 2001) is a Spanish professional footballer who plays as a central midfielder for Real Madrid.

Born in Madrid, Arribas joined Real Madrid’s La Fábrica in 2012, after representing CD Leganés and CDE Benito Pérez Galdós. In September 2020, after helping the under-20s win the UEFA Youth League, he was promoted to the reserves in Segunda División B.

Arribas made his first team – and La Liga – debut on 20 September 2020, coming on as a late substitute for Vinícius Júnior in a 0–0 away draw against Real Sociedad. His Champions League debut came on 9 December 2020 as a substitute, in a 2–0 victory over Borussia Mönchengladbach.