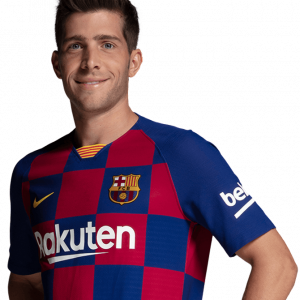 Sergi Roberto Carnicer (born 7 February 1992) is a Spanish professional footballer who plays for Barcelona and the Spain national team.

Mainly a full-back, he can also operate as a defensive midfielder, central midfielder or winger.

He spent most of his career with Barcelona after making his first-team debut at the age of 18, going on to win several accolades with the club including six La Liga championships and two Champions Leagues.

Sergi Roberto made his first full appearance for Spain in 2016.

Born in Reus, Tarragona, Catalonia, Sergi Roberto began playing football with local UE Barri Santes Creus at the age of 8, arriving in Barcelona’s youth academy six years later from neighbours Gimnàstic de Tarragona. In the 2009–10 season, at only 17, he first appeared with Barça’s reserves, contributing with 29 appearances as the team returned to the second division after 11 years.

On 10 November 2010, Roberto made his debut for the first team, playing the second half of a 5–1 home win against Ceuta for the campaign’s Copa del Rey (7–1 on aggregate).[8] On 27 April of the following year he made his first UEFA Champions League appearance, coming on as a substitute for David Villa in the last minute of a 2–0 away victory over Real Madrid for the competition semi-finals’ first leg.

Roberto first appeared in La Liga on 21 May 2011, playing the full 90 minutes in a 3–1 win at Málaga in the season’s last round. His first start for the main squad came on 6 December of that year, against BATE Borisov in the Champions League group stage, as manager Pep Guardiola rested all his starters for the upcoming El Clásico: in the 35th minute, he opened the scoring in an eventual 4–0 home win.

In only his third official appearance for Barcelona’s first team, on 12 January 2012, Roberto scored his second goal, helping the visitors come from behind to win it 2–1 against Osasuna in the domestic cup (6–1 on aggregate). On 16 December 2014, also in that competition, he netted another, contributing to an 8–1 demolition of Huesca at the Camp Nou.

In the 2015–16 season, after being reconverted by manager Luis Enrique and merely months after nearly being deemed surplus to requirements, Roberto appeared as a right-back in several games. In two consecutive matches against Athletic Bilbao in January 2016, one for the league and another for the Spanish Cup, he featured on the other flank in the place of injured Jordi Alba, going on to play in as many as seven different positions.

On 20 August 2016, Roberto started as a right-back and provided two assists in a 6–2 home defeat of Betis in the opening match of the campaign. On 24 September, from the same position, he again contributed two decisive passes in a 5–0 away rout of Sporting de Gijón.

On 8 March 2017, Roberto scored the final goal in the 95th minute as part of a decisive 6–1 home victory against Paris Saint-Germain in the second leg of the Champions League round-of-16, making Barcelona the first club to overcome a four-goal deficit in the competition. On 22 February 2018, he extended his contract until 2022.

In injury time of the first half of El Clásico on 6 May 2018, Roberto was shown a straight red card after punching Marcelo, in an eventual 2–2 home draw. He was first-choice right-back during the season ahead of newly signed Nélson Semedo, and his team won the national championship after a one-year wait.