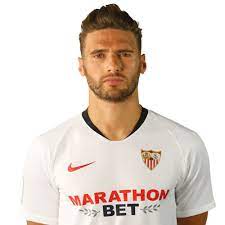 Sergi Gómez Solà (born 28 March 1992) is a Spanish professional footballer who plays for Sevilla FC as a central defender.

Gómez in action for Barcelona B.
Born in Arenys de Mar, Barcelona, Catalonia, Gómez arrived in FC Barcelona’s youth academy at the age of 14. Even though he appeared in only three Segunda División B games for the B side in the 2009–10 season, he would later play an essential role in their Segunda División successful promotion play-offs, after injury to fellow youth graduate Andreu Fontàs.

On 13 August 2010, as first-team manager Pep Guardiola provided Barça’s Spanish internationals with needed rest, Gómez was included in the nineteen-man squad to face Sevilla FC in the first leg of the 2010 edition of the Supercopa de España. He made his competitive debut in that match, playing the 90 minutes in a 1–3 away loss. Gómez was exclusively associated to the youth teams and the reserves during his spell at the Camp Nou, however.

Celta
On 1 July 2014, free agent Gómez signed a three-year contract with RC Celta de Vigo. He made his La Liga debut on 13 September when he came as a 75th-minute substitute in a 2–2 home draw to Real Sociedad, and he finished his first season with 22 appearances to help to a final eighth position.

Sevilla
On 23 July 2018, Gómez joined Sevilla FC on a four-year deal. An undisputed starter under Pablo Machín, he was deemed surplus to requirements after the appointment of Julen Lopetegui.