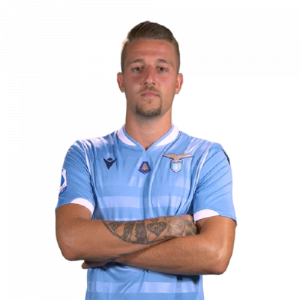 Sergej Milinković-Savić (born 27 February 1995), also known mononymously as Sergej, is a Serbian professional footballer who plays as a midfielder for Italian club Lazio and the Serbia national team.

On 31 July 2015, it was announced that Milinković-Savić would join Italian club Lazio. He made his debut for the side in a 1–0 home win over Bayer Leverkusen in the first leg of the Champions League play-off round on 18 August 2015. Milinković-Savić scored his first goal for Lazio in a 1–1 Europa League draw with Dnipro Dnipropetrovsk on 17 September 2015.

He scored his first Serie A goal in a 3–1 away win over Fiorentina on 9 January 2016. Throughout his debut season, Milinković-Savić made 35 appearances and scored three goals for Lazio in all competitions.

In his second season at Lazio, Milinković-Savić scored seven goals from 39 appearances (league and cup).