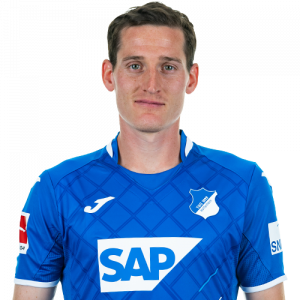 Sebastian Rudy (born 28 February 1990) is a German professional footballer who plays as a midfielder for Bundesliga club 1899 Hoffenheim, on loan from Schalke 04.

VfB Stuttgart
Rudy joined VfB Stuttgart’s youth academy in 2003 and started his senior career in 2007 with the club’s reserve team, playing in the semi-professional Regionalliga Süd. He made his professional debut with the same team in the newly established 3. Liga on 2 August 2008 against Union Berlin.

During the summer of 2008, he also signed a contract with VfB Stuttgart’s first team, for which he made his competitive debut in the first round of the DFB-Pokal on 10 August 2008 in their 5–0 away victory over Hansa Lüneburg.

Rudy with Bayern Munich in May 2018
On 15 January 2017, Rudy was transferred to Bayern Munich on 1 July 2017 after his Hoffenheim contract expired. On 6 August 2017, Rudy made his debut in a 5–4 penalty-shootout victory over Borussia Dortmund in the 2017 DFL-Supercup. In his first Bundesliga match with the club, he provided an assist from the free-kick to his fellow Bayern newcomer and his former Hoffenheim teammate Niklas Süle in a 3–1 win over Bayer Leverkusen. Rudy scored his first goal for Bayern Munich in a 3–0 victory over Hannover in the Bundesliga.